We hope everyone had a happy New Year.

There is a long informercial airing on American TV. It shows an endless parade of senior citizens, struggling to pay their bills, unable to buy that motorized stairway lift, play golf, or eat out at restaurants. The solution?

Get a reverse mortgage! The number to call is 1-800-GET-CASH. That number again is one eight hundred get your free cash now!

To summarize the point of the commercial—if not the terms of the fine print—the senior gets a monthly check, and this free money pays for all the things currently missing in his life. Free, as in magic unicorns and rainbows. Right?

Not so fast. The senior is merely borrowing. He’s just going into debt. He leverages his house to buy consumer goods. He begins with an asset worth, say $500,000, and no debt. And he ends with the same $500,000 asset only now it’s matched with a $500,000 liability. Therefore $500,000 worth of equity has been drained away. His equity, or more accurately, former equity has been dissipated.

He is spending his house, while still living in it. His kids, of course, forfeit their inheritance. The family home must be sold to pay off the mortgage—to a buyer who will probably have little to no equity either.

There is a great libertarian metaphor. First, the government breaks your leg. Then it gives you free crutches. People are supposed to be—and apparently are, looking at voting behavior—grateful for the crutches. But it should be obvious that crutches plus broken leg do not equal two strong legs.

The government breaks the legs of seniors by depriving them of interest on their savings. Good thing government comes to the rescue with crutches, in the form of reverse mortgages. The senior may not be able to walk—earn interest—but at least he’s propped up by an artificial appliance—a reverse mortgage.

Zero interest rate policy is the utopia envisioned by John Maynard Keynes. He actually called for the “euthanasia of the rentier.” Rentier means someone who lives on interest on his capital, including senior citizens. Euthanasia means driving interest to basically zero, to suffocate them.

The reverse mortgage promises the economically impossible. It would seem to violate Say’s Law, which basically says that you get the consumer goods you want by producing something to trade for them. The senior is no longer productive. And with zero interest, his capital is not enabling a productive activity either. So how does he get this free purchasing power? Where do the free stair lifts and golf clubs come from? What does he give, in exchange?

If you are consuming goods, but not producing goods to exchange, then there is only one possibility. You are trading a capital asset that was previously produced. In this case, the capital asset is the senior’s house.

This story would be bad enough if it were isolated to a lone case. We would shake our heads and say there will always be people who make bad decisions. But it is not isolated. It is occurring on a large scale, due to the Fed’s war on interest.

The productivity—and hence yield—is being sucked out of capital. This is why banks pay about zero on savings (and why marginal productivity of debt has been falling for many decades). It’s an economic tragedy. If you can’t get a return on your capital, then you must consume it. And we are systematically consuming capital all across the economy.

The design and manufacture of a stairway lift requires engineers, metal fabricators, motors, etc. All of the employees of the various companies have to eat, drive cars, etc. And all of those companies are wearing out their manufacturing machinery.

It should be simple common sense to see that, if there is no capital production elsewhere to offset it, that something is being depleted. It may take an economist to precisely identify the causal chain, but an 8th grader should be able to see that there ain’t no such thing as a free lunch.

The free lunch is coming from … the savings of the next generation. They are earning income and depositing it in the banking system. It’s their deposits which are lent at dirt-cheap rates to the golf-playing, stairway-riding senior. Their savings is being consumed, replaced with a note that says the senior owes them $500,000.

When the senior dies, the buyer borrows at dirt-cheap rates to buy the house. The savers who had financed the senior’s consumption are repaid—with the savings that finance the next buyer of the house. In other words, the debt is not repaid but merely shifted. That which was consumed is not returned by new production. The banking system merely changes the names on various records of debt and savings. Capital consumption continues unabated.

Needless to say, that if rates weren’t pushed to dirt-cheap levels, the bid on the house would not be $500,000. If buyers had to satisfy savers in a free market, it would mean at least, 20% down, 15 year amortization, and a reasonable interest rate. What could most buyers afford under these terms? It would be a fraction of $500,000. Even if a senior were inclined to consume his house, he wouldn’t get a lot of money and it would cost him more to get it. Reverse mortgages would not be a big thing.

Falling interest not only enables consumption of senior citizen’s capital, it forces it.

Something unusual happened in both the gold and silver markets on Thursday. We do not refer to change in price, but in spread.

The prices moved up this week $27 and 54 cents respectively, but there was nothing unusual about either the size of the moves, nor the path they took; the price charts look orderly. It’s the basis chart that shows a quantum change in supply and demand. We will look at charts of this change, below. 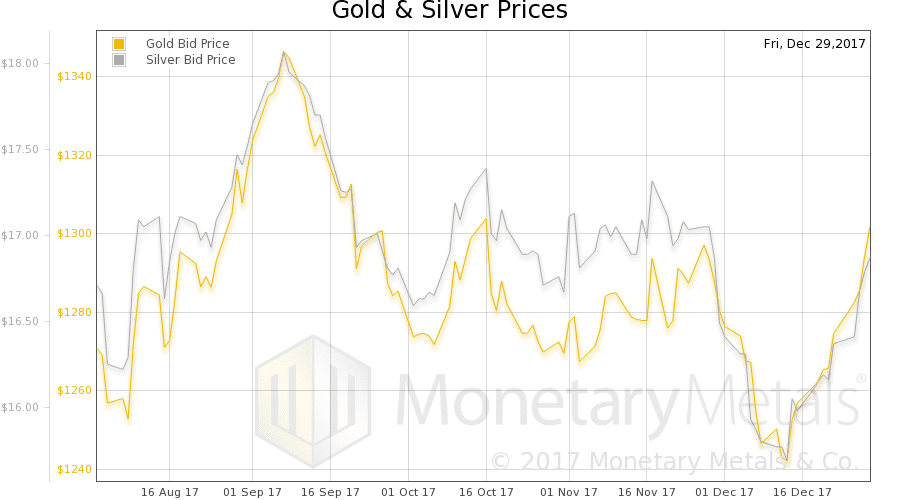 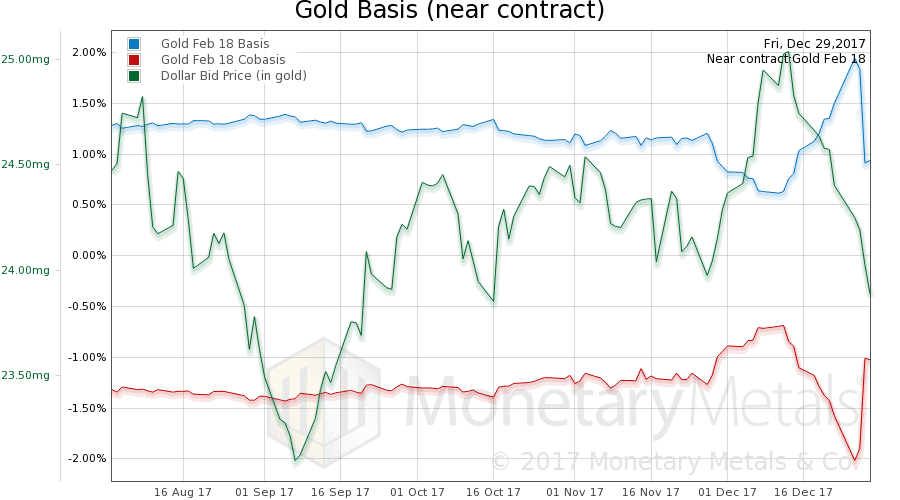 We have written many times that the price of the dollar (i.e. inverse of the price of gold stated in rubber band dollars) has had a correlation with the cobasis (i.e. scarcity). This is a fancy way of saying that as the price of gold goes up, gold becomes less scarce; more people are bringing their gold into the market.

Well not this time.

This time, it was buying of metal, not buying of futures on leverage.

Now here is the chart of the gold price overlaid with the cobasis, zoomed in to show Wednesday and Thursday. On Wednesday, everything looks normal. The rising price has at first a flat cobasis, and then late in the day (the timestamps are GMT) the cobasis is falling as price is rising after around 18:00 (13:00 in New York, 10am in California). That’s normal, speculators buying gold futures (which is really just a leveraged bet on a falling dollar, though they don’t think of it that way). After 22:00 (17:00 in New York), the markets are all but closed, and there’s no trading and hence we see the cobasis is a flatline. Then something remarkable occurs.

The cobasis shoots up 40 bps, from around -195bps (prior to the illiquidity before market closing) to -155bps. The next day in London and even New York, the cobasis does not revert to its prior level. It keeps on rising.

The cobasis is rising with price! This is a signal, not of leveraged futures buying, but of buying of gold metal.

To this, let’s add two caveats. One, this is a holiday week with Monday being a bank holiday in the UK for Boxing Day and the following Monday is New Year. Surely, liquidity is thin.

And the absolute level of the cobasis is not exactly screaming “shortage”. It is quite negative (and our fundamental price is just a few bucks above the market price). At the end of Thursday, the cobasis is still -1% (with basis at +0.9%). What is remarkable is not the level of the cobasis here, but the change. It may have begun overnight, but it endured all day Thursday and Friday too.

It definitely bears watching this week.

By the way, the price moved up $21 subsequent to this move in the basis and cobasis; the cobasis move was a leading indicator.

The same thing occurs as in gold, though it’s a smaller move.

Here is the Wed-Thu graph for silver.