Listen to the audio version of this article here

A New Type of Fighter Bonus

The UFC has started paying fan bonuses to its fighters in Bitcoin. The UFC buys crypto at a fixed dollar amount and pays their fighters a bonus in cryptocurrency. As someone who loves the UFC and monetary economics, I wanted to offer an alternative solution to the UFC and its athletes.

The Problems with Crypto

This takedown of crypto will focus on the speculative aspect of cryptocurrencies. Crypto’s greatest draw is also its fatal flaw. I’m referring to its superior ability to skyrocket (and crash) compared to other assets. And since Bitcoin will always be volatile by its very nature, the UFC is not helping its fighters by giving them such a volatile asset as a reward.

Fighters holding Bitcoin aren’t investing, they’re speculating. In other words, it’s a bet, a gamble. Imagine the outrage if the UFC gave fighters a lottery ticket as their fan bonus!

We aren’t saying don’t gamble. Rather, appreciate that owning crypto is fundamentally a gamble on the price going up. At the time of writing this, fighters who won a Bitcoin bonus saw their bonuses sharply decrease in value by up to 50%. That’s a gut punch.

The Problems With Dollars

Dollars on the other hand don’t fare much better. Although dollars aren’t as volatile as Bitcoin, they are problematic in another way. UFC fighter Bryce Mitchell correctly deduced how the Federal Reserve is debasing the dollar, with its stated goal of 2 percent debasement of the currency every year. Current CPI inflation is at a 40-year high (which is longer than the UFC has been around) and the dollar will continue to buy less and less for Americans as time passes.

Government-caused inflation persists, which is why the UFC is right to be thinking outside of the dollar box.

There’s a better solution than hyper-volatile crypto, or leaky dollars. And it exists inside every UFC belt: Gold.

Gold is the best money, and pound for pound the best asset the UFC could give its fighters. Gold has been accumulated for thousands of years (with no signs of stopping) and has a reliable track record of stability, while the crypto hype train has already seen massive losses.

The price of Bitcoin, which can easily drop 10% in one day, is clearly not a safe bet for fighters looking to store and generate long term wealth, or plan for their post-fighting financial needs. 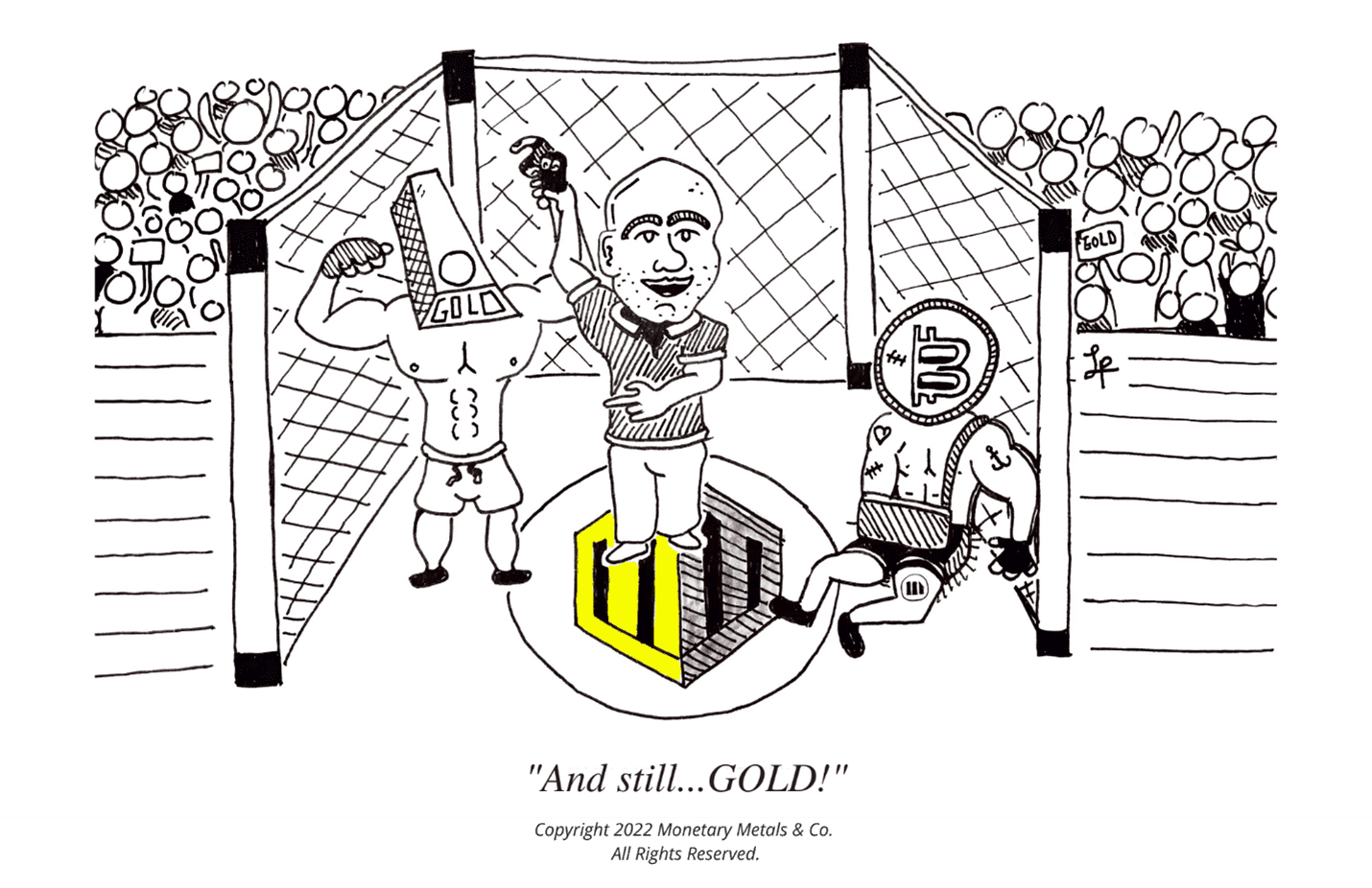 We calculated the standard deviation of the Bitcoin price and the gold price over the last ten years.

Bitcoin has been nearly ten times more volatile than gold over the last ten years!

So, instead of giving fighters a bonus in a highly volatile asset like crypto, the UFC should consider giving all its fighters their bonuses in gold.

At Monetary Metals we welcome fierce competition when it comes to providing the world with valuable financing and investing options. The score card for this sound money grudge match began at Gold 1, Bitcoin 0. Then we made it Gold 2, Bitcoin 0 when our CEO won his gold vs bitcoin debate.

So Dana, if you don’t know, now you know!

At the time of writing this, Bitcoin is being priced at around 21K USD. It could go to 1 million or 1 dollar by the time you read this. Meanwhile Monetary Metals clients are earning anywhere from 2% to 3% on their gold every year, watching their total ounces grow. Learn more here.

*Data taken from the daily price of Bitcoin and Gold over previous 10-year period.

Ep 39 – Tavi Costa: Breaking Down the Pressures on the Market
Scroll to top